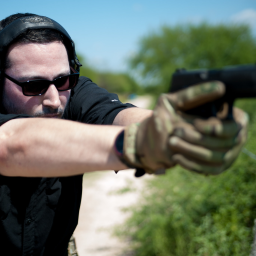 As with all things in life, there are stereotypes filling the gun industry that need debunking. And, as stereotypes usually are, these ones are also very wrong. Let’s take a look at some of the various stereotypes I see floating around the gun industry, regarding its owners. Keep in mind, I see and meet a lot of people because I travel around the country to different shows and gun-related conferences, so I see first-hand that these are wrong.

One of the biggest stereotypes I see is that there are only men who participate in the gun world. Many folks wrongly assume that women either do not belong here, or that women have no interest in guns, because for whatever reason, guns are barbaric and women don’t want to protect themselves from rape or abduction.

I know a lot of gun owning women and, those ladies can *usually shoot circles around men. This tells me that those ladies are into their guns, however barbaric they may be. Here are some stats from the National Shooting Sports Foundation to help explain it all away.

#2 All Gun Owners Are White

Not all gun owners are light skinned people. It is true that most of the gun owners are, but there are plenty of gun owners who are not. Again, as with the ladies, I personally call several people with differing pigments of skin by the term friend. They own guns and some of them are “gasp” members of the NRA!

#3 All Gun Owners Are Backwoods Countryboys

This is probably my favorite one because it’s so idiotic to think about. There are plenty of uneducated people who believe all gun owners are pickup truck driving, backwoods rednecks who married their third cousin.

I picked those two cities because they are known for being incredibly anti-gun. But there are plenty of other gun owners living in big cities who are pro gun, and don’t drive a pickup truck with a gun rack.

And, this may sound strange to you, but I don’t know anyone married to their cousin.

This one really makes me boil. Seems like the other side, our opponents, only have one argument that can do anything. Because we believe in freedom and the right to own guns for self-defense, we must be racist. Uh, no. I’d defend myself against white folks just as much as I would anyone else with a darker pigment. The truth is, there are dirtbags from every race, to include those who are light skinned, and none of them deserve to hurt myself or family. Period.

Now, I’m sure there are some racist gun owners out there who are white, just like there are racist gun grabbers who are white. That’s sadly just the way some people are. Do the majority of us condone racism? Not that I’ve seen. In fact, I’ve seen quite the opposite. Gun owners are usually some of the nicest people I’ve ever met regardless of their skin color, or who they’re talking to. In fact, we have a bigger tendency to fight over which gun is better, Glock or 1911, than people fighting over the color of their skin.

In all reality, gun grabbers, it’s time to grow up and find a new argument cause that crap is getting old.

#5 Gun Owners Have a Tendency Towards Violence

There is something somewhere that suggests we are all just waiting in hiding for someone to break into our house so we can make an example out of criminals. That’s simply not true. First, I have no desire to shoot anyone. Second, do you actually think I want to have to shoot someone in front my my little kids? I don’t.

Will I if I have to? Absolutely. But I’m not looking for a fight just to say I used my gun for self-defense. That’s asinine.

And, as someone who has fired guns without ear protection, I can say that I don’t want my kids subjected to that, either. I have permanently damaged ears and I don’t need that for them. But, because I don’t feel like jumping through the necessary hoops to own a suppressor to protect our hearing, I can’t use one of them.

Finally, guess what? There are millions of us gun owners out there. If we WERE violent, don’t you think you’d have found out about it by now? It’s not violence we lean towards, but freedom and self-defense. So, of course, there is also this, which may seem ironic, but I assure you it is not …

When you threateningly back a dog into a corner attempting to hurt or capture him, he has no choice but to go through you towards freedom by any means necessary.

Take that for what it’s worth, but the corner is getting closer.

There are other stereotypes regarding gun owners, but these are the most popular ones I’ve come across. I have a hard time with these, because these sorts of things are used against us in the gun control debate.

I encourage you to open your eyes and take a look around to see the true nature of things, before relying on someone else’s views or ideas.

Finally, I figured I’d debunk everyone of these stereotypes by using just one person … get this, my good friend Annette Evans hails from a larger city on the east coast, is a woman, has never killed anyone, and isn’t a white man. Dang, seems like I just debunked all of those myths with one lady. If you need proof, here is something she did for us on purse carry.

Take a Class with us:

Please log in again. The login page will open in a new tab. After logging in you can close it and return to this page.