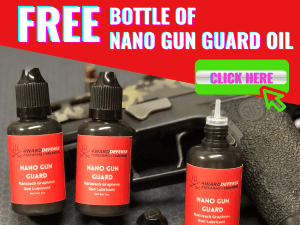 Why Haven’t You Ever Heard of This Ammo?

The Perfect Concealed Carry Gun Does These 4 Things:

California Gun Homicides increase 18% in the past 2 years despite draconian gun control measures.

[Please Read and Review for your Knowledge]

Governor Greg Abbott has now signed many pro-Second Amendment bills sent to him from the 2019 session.  Thank you to pro-Second Amendment leaders and lawmakers in the House and Senate for their work to ensure passage of these measures.  Here is a list of and review of the changes in Texas law coming September 1, 2019:

•House Bill 121 by Rep. Valoree Swanson (R-Spring) & Sen. Brandon Creighton (R-Conroe) provides a legal defense for License To Carry holders who unknowingly enter establishments with 30.06 or 30.07 signs, as long they promptly leave when verbally informed of the policy.

[WHAT THIS MEANS] Now, any discovered LTC holder unknowingly or mistakenly entering an establishment with their handgun MUST be given a verbal command to leave prior to getting law enforcement involved. At 4Ward Defense, we strongly encourage you NOT to use this as an excuse to knowingly enter these premises with your firearm, but know that if it happens accidentally, you will be given the opportunity to promptly leave before you can be prosecuted. For example, a hospital may have signage listed on the front door, but has neglected to list the signage at every single entry point, creating situations where individuals would not know they are prohibited from possessing a firearm on the premises.

•House Bill 302 by Rep. Dennis Paul (R-Houston) & Sen. Bryan Hughes (R-Mineola) prohibits “no firearms” clauses in future residential lease agreements and protect tenants’ rights to possess lawfully-owned firearms and ammunition in dwelling units and on manufactured home lots, and to transport their guns directly between their personal vehicles and these locations.

[WHAT THIS MEANS] Some Unsavory landlords have in the past snuck anti-gun clauses into lengthy lease agreements, hurting individuals abilities to defense themselves in their own apartments. While we at 4Ward Defense are proponents of reading ALL aspects of any lease prior to signing it, some people do not. Furthermore, many tenants have read such sections and are afraid to challenge lease terms featuring anti-gun clauses for fear it would lead to losing the lease. Now, any such leases future leases are prohibited from having such restrictive language and tenants may transport their firearms between their vehicles and those locations without fear of breaking the law.

•House Bill 1143 by Rep. Cole Hefner (R-Mount Pleasant) & Sen. Bryan Hughes (R-Mineola) prevents school districts from effectively prohibiting the possession of firearms in private motor vehicles by limiting their authority to regulate the manner in which they are stored in locked cars and trucks — including by employees.

[WHAT THIS MEANS] While we already have legislation from our previous sessions protecting an individuals or school employee’s ability to posses (and leave) a firearm locked and concealed in their vehicles on school premises, this law strengthens those rights even further.

•House Bill 1177 by Rep. Dade Phelan (R-Beaumont) & Sen. Brandon Creighton (R-Conroe) protects citizens from being charged with a crime for carrying a handgun without a License To Carry while evacuating from an area during a declared state or local disaster, or while returning to that area, and allows shelters which are otherwise prohibited locations to decide whether to accommodate evacuees with firearms in their possession.

[WHAT THIS MEANS] While there has been some limited pushback from law enforcement about this new law claiming it would make it more challenging to discern criminals from law abiding citizens, this new law allows non-LTC holders the ability to protect themselves and their family during disasters and evacuation. Furthermore, we must add that during disasters there is a dramatic increase in crime, looting, and theft. A firearm owner being forced to leave their guns at home or in their vehicle during a disaster has been a ripe target for firearms theft during previous disasters, resulting in more armed criminals. This allows individuals to keep their firearms with them during difficult times.

[WHAT THIS MEANS] Let’s be real clear here. As a Texas resident, YOU OWN THE STATE. The Legislators, DA, Governor and All Law Enforcement work for you. YOU own all state facilities and assets. It’s YOUR STUFF. The state BELONGS to the people. Unfortunately this has not stopped corrupt state, county, and city officials from trying to prohibit you from entering your property. This new law strengthens your rights by further prohibiting counties and agencies from attempting to do so, closing another loophole they used to attempt to use.

[WHAT THIS MEANS] Previously, for some insane reason, foster parents were deprived of the same ability to quickly and effectively protect their family by being forced to store their ammo separate from their firearms. This was forced upon them even when they were already taking the lawful steps of ensuring the firearms were inaccessible to anyone except those who had intended access. We are glad to see the the legislators have acknowledged these wonderful individuals deserve the same level of preparedness and protection afforded to others to protect their families.

•House Bill 3231 by Rep. Travis Clardy (R-Nacogdoches) & Sen. Pat Fallon (R-Prosper) improves and modernizes the state’s firearms preemption law, curbs the ability of municipalities to abuse their zoning authority and circumvent state law to restrict the sale or transfer of firearms and ammunition at the local level, and allows the State Attorney General to recover reasonable expenses incurred when obtaining injunctions against localities which violate the preemption statute.

[WHAT THIS MEANS] In Texas, it is already prohibited to enact additional restrictions at a local level to otherwise restrict the sale or transfer of firearms at the local level- but Zoning authorities had continued to attempt to do so. This new law makes it hard for them to restrict your firearm and ammo rights.

•Senate Bill 535 by Sen. Donna Campbell (R-New Braunfels) & Rep. Dan Flynn (R-Van) strikes “churches, synagogues, or other places of worship” from the list of prohibited locations in the Penal Code, clarifying that these places have the same right enjoyed by nearly all other controllers of private property in the state to decide whether to allow License To Carry holders on their premises.

[WHAT THIS MEANS] As you learned in our class, you are allowed to enter churches with a handgun as an LTC holder that do not post 30.06/30.07 signage on their premises. With this new law, it has been further clarified and these places have been removed as a line item and relegated to general private property status. So, essentially nothing has changed except that the law is written in an clearer way to understand.

•Senate Bill 741 by Sen. Bryan Hughes (R-Mineola) & Rep. Brooks Landgraf (R-Odessa) prohibits a property owners’ association from including or enforcing a provision in a dedicatory instrument that prohibits, restricts, or has the effect of prohibiting or restricting any person who is otherwise authorized from lawfully possessing, transporting, or storing a firearm.

[WHAT THIS MEANS] Some evil HOA’s have been known to use some sort of deed restrictions to attempt individuals from expressing their Second Amendment rights. Not anymore. Sorry HOA’s, you have no power here now.

•Senate Bill 772 by Sen. Bryan Hughes (R-Mineola) & Rep. Drew Springer (R-Muenster) provides civil liability protection to business establishments which choose not to post 30.06/30.07 signs, making them less vulnerable to frivolous lawsuits and giving them an incentive to adopt permissive policies for the carrying of handguns by law-abiding citizens on their premises.

[WHAT THIS MEANS] In some of the most blatantly backwards legislation possible, locations that post 30.06/30.07 signs that restrict your rights are granted CIVIL LIABILITY PROTECTION from lawsuits where someone gets harmed during a shooting. Obviously this is garbage law, and simply give businesses’ lawyers incentive to encourage the posting of these restrictive signs under the banner of “reducing likelihood of litigation”. While we fell short of repealing this stupidity during this legislative session, we have made progress by providing the same level of civil liability protection to those businesses that refuse to post such anti-second amendment signage. This is a great move in the right direction for our rights.

Please log in again. The login page will open in a new tab. After logging in you can close it and return to this page.